Creation of an Industrial Chair and a Collaborative R&D program 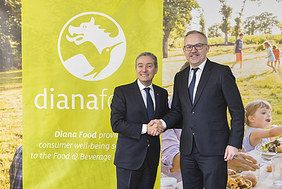 Diana announces the launch of a 5-year research program about the impact of polyphenols on gut microbiota modulation.

On Monday April 16th, 2018, as part of the official visit of Canadian Prime Minister, Justin Trudeau, Diana was honoured to welcome Mr. François-Philippe Champagne, Minister of International Trade of Canada, accompanied by a delegation of the Canadian Embassy in France in Diana’s offices in Clichy-la-Garenne (France, 92). This visit was the opportunity to announce the creation of an Industrial Research Chair (CRI) and a Collaborative Research & Development (RDC) program in partnership with Université Laval (INAF - Quebec), in the field of gut microbiota health.

Diana, a committed player, present in Quebec since 2012

Diana began its development in Canada in 2012, opening its first site in Saint-Blaise-sur-Richelieu in Quebec. This subsidiary, which counts around 20 employees, specialises in the production of palatability for cat and dog food. In May 2016, Diana acquired Nutra Canada, a key player in Nordic berry extracts and health actives. Located in Champlain, Quebec, and renamed Diana Food Canada Inc., the site has special, direct access to cranberry-growing areas. A fully integrated production process meeting high standards of expertise is allied with cutting-edge technology, such as ethanol extraction, chromatography and vacuum drying. With a workforce of around thirty people, Diana Food Canada Inc. has become a benchmark site in natural health actives made from small fruits and Nordic berries. Its products are marketed around the world, particularly in Europe. Historically, Diana Food Canada Inc. has strong local roots. It works in close cooperation with a network of scientific and technological partners, including the Université Laval and its Institute of Nutrition and Functional Foods (INAF - Quebec).

Diana, an innovative player investing in Research and innovation

Innovation is a growth driver at Diana, where the Research and Development team make up over 10% of the workforce. Building on its expertise in fruit and vegetable polyphenols and their antioxidant properties, Diana is continuing to explore the positive impact of polyphenols on health, this time with respect to the modulation of gut microbiota. Recent discoveries related to gut microbiota have opened new perspectives to gain a clearer understanding of different diseases (diabetes, obesity, etc.) and are attracting growing interest from researchers in personalised medicine and nutrition. At the same time, research into the health effects of polyphenols is continuing to maintain strong momentum. Reflecting this, between 160 and 180 articles are published every week on the subject of microbiota, and 60 on polyphenols. In 2017, a panel of international experts recognized that polyphenols could have a positive impact on the modulation of gut microbiota and be considered as prebiotics. Through its subsidiary Diana Food Canada Inc., Diana has put in place an ambitious 5-year research programme with Professor Yves Desjardins and several researchers from the INAF. Two subjects of study have been identified: exploring the effects of fruit and vegetable polyphenols on the modulation of gut microbiota and finding out more about the underlying mechanisms of action of these bioactive compounds, alone or combined with probiotic bacteria.

1) an Industrial Research Chair (CRI) on the prebiotic effect of polyphenols in fruit and vegetables;

2) a Collaborative Research & Development (RDC) program on the development of synergistic combinations of prebiotic polyphenols and probiotic bacteria with the purpose of modulating the gut microbiota and better understanding their interaction mechanisms.

This partnership-based research program is jointly financed with Canada’s Natural Sciences and Engineering Research Council (CRSNG). The total budget for this key programme is 2,620,000 Canadian dollars. The general objective of the CRI is to show that the tannins in Nordic berries (cranberries, cloudberries, etc.), tropical fruit (bananas, camu-camu, acerola) and some polyphenols in vegetables (onions) have a specific prebiotic effect in that they can modulate gut microbiota in a positive way. In consequence, the program aims to develop new, efficient, natural polyphenolic extracts. For example, the program will study ways to recover co-products such as banana peels (20,000 tons/year from the production of organic banana puree) from the Diana Food plant in Ecuador, as well as from local Nordic berries such as cloudberries. The general aim of the RDC project is to develop combinations of polyphenols, using fruit and vegetable extracts with high tannin and flavanol content based on the work of the CRI program, and of probiotic bacteria (particularly strains of Lactobacillus plantarum), in order to show their effect on the balance of simplified artificial microbiota and to examine their mechanisms of action on in-vitro cellular models of the intestine.

This research program is part of the strategic development plan of Diana, its subsidiary Diana Food Canada Inc. and its international collaborative ventures with sister companies such as Probi (Sweden) and the Symrise Group (Germany) to which Diana belongs. This project will enable the company to develop unique natural products currently in strong demand and thus to increase its national and international market share. It is also an opportunity to position its Canadian plant as the spearhead for extracts of fruit and raw materials from Canada, as well as from South America, placing particular emphasis on the recovery of co-products that are currently discarded. Significant benefits are expected from the development of the Champlain production site, the local production of small fruits (cranberries and Nordic berries) in Quebec, and the increased turnover of Diana Food Canada Inc. through the sale of these ingredients for the Canadian market and the export of these new ingredients to Europe, the US and Asia.